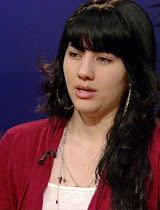 Sandra Lopez, 22, a lifelong Tucson resident who was brought to the USA as a three week old infant by her immigrant parents, is a graduate of Amphitheater High School in Tucson, where she was an honors student. She is one of the two million undocumented immigrants who were deported under the Obama Administration over the last five years, despite the fact that she would have been eligible for the Deferred Action for Childhood Arrivals (DACA) status, a program that allows people who were brought to the US at a young age to apply for work Permits and to guarantee against deportation for two years.
Deported without any of her money, her cell phone or her personal belongings, Sandra spent five days living on the streets of Nogales, Sonora, Mexico, dodging sex traffickers and sleeping in a railroad car. When she asked a Mexican police for help in finding safe shelter, he also tried to recruit her for prostitution.
On her last day in Nogales, Sandra was accosted b an armed man who tried to drag her off the street. She ran up lanes of traffic at the US DeConcini Port of Entry to ask for help from US Customs and Border Protection. They told her that an asylum officer would talk to her about what happened to her in Mexico. Instead, she found herself facing felony charges for illegal re-entry to the US after a deportation. She was convicted of the felony and transferred to a private, for profit federal prison in Florence, Arizona.
After spending four months in Florence, Sandra was transferred to the Eloy Detention Center in Arizona, where she spent the next two years fighting for asylum in the US from within the privately run for profit prison. She is sharing her story so that people will know the stories of the two million immigrants, many of whom were brought to the US as children and whose extended family has lived here 20 or 30 years.
Position of the US Catholic Church
The United States Conference of Catholic Bishops (USCCB) opposes “enforcement only” immigration policies and supports comprehensive immigration reform. In Strangers No Longer: Together on the Journey of Hope, the U.S. Catholic Bishops outlined the elements of their proposal for comprehensive immigration reform. These include:
CHECK OUT THESE RESOURCES:
Share your comments, concerns and prayers in our COMMENTS SECTION

PAKISTAN: Muslim leaders who issued decree to kill a Christian woman should be prosecuted

The Xaverian Missionaries in Thailand