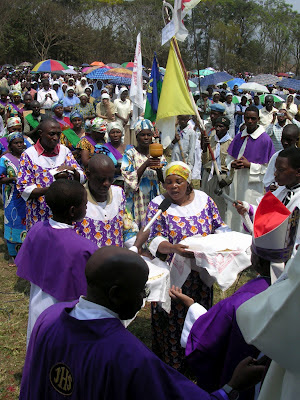 The Xaverian Missionaries, arrived in DRC (formerly Zaire) in 1958. Starting from Uvira, we have multiplied our mission stations, built schools, prepared community leaders, and provided for the birth of numerous Christian communities. We have given particular attention to the younger generations to provide them with a sense of justice, dignity of work, and openness to others in charity and mercy.

In recent times, It is crucial to understand the reasons for the continuation of violence in the Congo. The Congolese conflict is one of the deadliest since World War II. It has resulted in more than five million casualties so far. It has destabilized most of Central Africa for the past sixteen years, and it remains one of the largest ongoing humanitarian crises in the world.

Fr Antontio Trettel  SX sent a summary from Fr. Giuseppe Vignato SX of the 3 day march for peace In the Democratic Republic of the Congo.

“We finished the 3 days of prayer for peace in the east with a march and celebration in Kalundu (the port area, south of Uvira) then on tol Kilomoni / north-east of Uvira, on the border with Burundi.  It ended with the solemn celebration of the Eucharist, presided by the Bishop of Bukavu with a score of concelebrants, in purple, and a large crowd, engaged and attentive, with placards and chanted slogans for the day, lasting about 4 hours . The beautiful Mass had more than a thousand worshipers. In addition to songs of thanksgiving after communion there was a moment  of silence for the victims of war in North Kivu, and the hundreds of thousands of displaced and refugees. Silence gave way to the clapping of hands, and  banging on pots and iron doors, whistles, etc. to express popular anger against the war and the risk of the ‘Balkanization’ of the nation.” (G. Vignato)

More on this…Please pray for peace in the DRC

The Feast of the Body of Christ and Global Justice

Tolerance and Tension: Islam and Christianity in Sub-Saharan Africa