Fr. Girolamo Pistoni, Xaverian Missionary and pastor of our parish, St. Guido Conforti in Makeni, Sierra, shares his experience as the parish grapples with the terrible effects of the Ebola Virus.

When the virus Ebola hit the Northern Province of Sierra Leone in July, tension was high due to the lack of acquaintance with this new disease. But later one question arose in the diocese of Makeni and among the Xaverian Missionaries: What can be done to help the country in this dramatic situation?
The first answer was: be very prudent!! 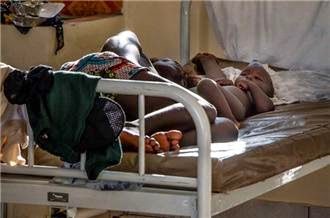 Thanks to the sensitization promoted by the authorities, through the media, especially through the FM radio stations, almost everybody in the country now knows how to avoid Ebola infection. We ourselves try to implement the simple measures that can help to save lives, such as: avoiding body contact, for example the shaking of hands when greeting; suspension of the funerals, main source of contagion; cancellation of all pastoral activities, except the Mass in the morning and the rosary in the evening.

This information has been passed on also to the prayer leaders, by organizing a workshop in each parish of Bombali and Port Loko Districts. A diocesan team, formed by a priest, a nurse, a member of Caritas and one of Justice and Peace Commission visited the parishes and presented very useful information on Ebola from the pastoral, medical and social point of view. In Conforti Parish the workshop was held on Wednesday 22nd of October and was attended by 26 people.

The Diocese and the Xaverians realized  that those who suffered were not only those infected by the virus, but also their families, who were put in quarantine and therefore the second answer to what could be done to help the country was: “coming to the aid of the families in quarantine”.
When a member of a family is found positive to Ebola, all those who live in the same house are obliged to remain inside the boundary of their compound, without coming into contact with other people, for 21 days. The soldiers and the police guard these places to prevent any escape or intrusion from outsiders. If later another member of the same family presents symptoms of Ebola or dies for the same reason, the counting of the days of the quarantine period starts again from zero.

A family of Masongbo, a village distant four kilometers from Makeni, started their quarantine on the 7th of August and finished on the 15th of October! They were thirty in number at the beginning of the crisis, half of them died.

This isolation is a very serious problem, because most people have not saved any money, not even 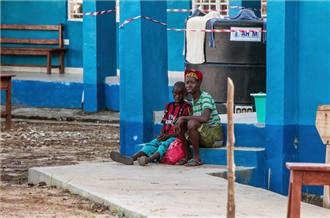 extra food in their house. At the same time they cannot go out and do some work to provide for their sustenance. Hunger becomes a real threat. The head of a family in New London (a zone of our parish) was complaining and crying because the neighbours did not allow them to draw water from the well.

In addition, their friends and their family members, due to ignorance, are afraid to visit them and therefore they remain isolated and without help.

The Government came to the rescue by providing them some food. But when the family is large, the rations received last only for a few days. For this reason, in dialogue with the Diocese, we decided to add something to the supply given by the authorities.

Fr. Natale, the Administrator, and our General Direction have offered money donations. Even the catholic community of Mongo Bendugu have collected some cash for the Conforti parish in order to help the people in need.

The christian community of St Conforti parish, too, decided to join in these efforts by bringing to the church, during the Sunday mass, some provisions, such as rice, clean water, onions, charcoal, salt, maggies, milk for the babies and other items, to be shared among the families in quarantine.

When a parishioner brings the message that a family living inside the boundary of St Conforti parish, regardless of their religion, has been put in quarantine, a team, formed by the priests and some members of the church, visit them, to express their sympathy and to see how the community can address their needs.

They keep at a safe distance, in order to avoid contagion and ask them information of the members who have been brought to the hospital and they are encouraged to be strong in such a difficult moment, because as the krio proverb says: “hawevar tin tranga tete, i de don” (even if a situation is very difficult, it will come to an end).

After praying together, they are informed that the team will return the following day with the food they need to survive.

Even if they suffer a lot for the loss of their beloved (in one of the families with 20 members, who received assistance, only six survived), they do not feel abandoned and left to themselves. They are certain that the Catholic community has not forgotten them and will be close to them during the duration of the quarantine.

Forging a Path into the Future for 20 countries Worldwide

The Complex and Interesting Landscape of Atheist/Theist Dialogue

Fasting for Ramadan as a Catholic