Pope Francis entrusted to us consecrated men and women the task of bringing the embrace of God to all not only by our words (by our preaching and by our shouting) but more importantly by our actions. Pope Francis says, “People today certainly need words, but above all they need a witness to the mercy and tenderness of the Lord, which inflames the heart, awaken hope, appeals to the good.” The same challenge to be a witness was powerfully described by Pope Paul VI who asserted that “modern man listens more willingly to witnesses than to teachers, and if he does listen to teachers, it is because they are witnesses.”

Consecrated people are disciples, called to be living witnesses of Jesus, of His life and of His deeds wherever they are. Where I am planted, there I am called to grow. In June 2008 I left the Philippines for Sierra Leone to witness and proclaim the story of God’s great love to all.

Sierra Leone is famous now all over the world for the Ebola virus. The Ebola virus disease is a severe, infectious disease that can be fatal (the fatality rate of the 2014 outbreak in West Africa is about 50%). People become infected through- direct contact, through broken skin or mucous membranes, with the blood or other bodily fluids or secretions (stool, urine, saliva, semen) of infected people. Infection can also occur if broken skin or mucous membranes of a healthy person come into contact with environments that have become contaminated with an Ebola patient’s infectious fluids such as soiled clothing, bed linen, or used needles.

When the Ebola outbreak reached Makeni City in the Northern part of Sierra Leone around the end of July 2014, some of my relatives, friends and confreres from other parts of the world  asked me about the situation and some were worried and suggested that I should go somewhere safer. The first time I heard about the virus was in January 2014. I was not worried at that time because I thought this was one of the many viruses that come and go quickly. Unfortunately, it is not the case, as at present the number of deaths for Ebola in Sierra Leone has reached 1, 000 plus.

The first person who contracted Ebola here in Makine City was from St. Conforti Parish where I am presently working as assistant Parish priest. When I heard that an Ebola case was just around the corner I began to panic to the point of having diarrhea for some days and sleepless nights for almost a month for fear of contracting the deadly virus. Sharing information among confreres helped us to grow in the knowledge of the virus.  Openness to others’ feelings like fears, anxieties and worries among our community members helped a lot to lessen the concern and uncertainties that all of us experienced. This moment of crisis has become an opportunity for our Xaverian communities to cultivate friendship and trust and to seek together a solution with love as Pope Francis encourages us to do.

The joyous fraternity among us, especially in the Religious House, helped me to come out of my “nest” and find the courage to go to people in quarantine. My first encounter with possible Ebola patients was on 17th August 2014. I remember the day very well because for the first time in my life I took a shower with Dettol after visiting quarantined houses. The first visit was dreadful for me. This is what I wrote on my journal on that day: “There are 12 people still alive and 13 were suspected to have  died of Ebola. People inside have been sleeping on the ground and only today did they receive mattresses. Soldiers and policemen armed with guns are there to ensure that people stay in their respective houses. I had the chance to talk to one member of the family who is in quarantine (for prudence the conversation was from a distance). He is traumatized by the situation because the 13 people who died were all relatives of his. He was crying while telling me that some of his relatives were taken by the medical people to the treatment center and never returned. They died of Ebola. Some members died in the house without confirmation from the medical doctors of whether they died of Ebola or not. He strongly believes that they died not of Ebola but of hunger. Three days ago, a two-year old boy died. They buried him on the following day. The lack of food and clean water adds more tension to the families in quarantine. This man believed some of his relatives would have been saved if there had been food to eat and water to drink. Their neighbors prohibited them to take water from the wells because they were afraid that they could contract the dreadful disease. They are depending on  rain water or on some generous friends who give them water to drink and to bathe.” Out of twelve people who were still alive during my visit, only five survived: three children, one grandmother and one  man. They are all safe now. 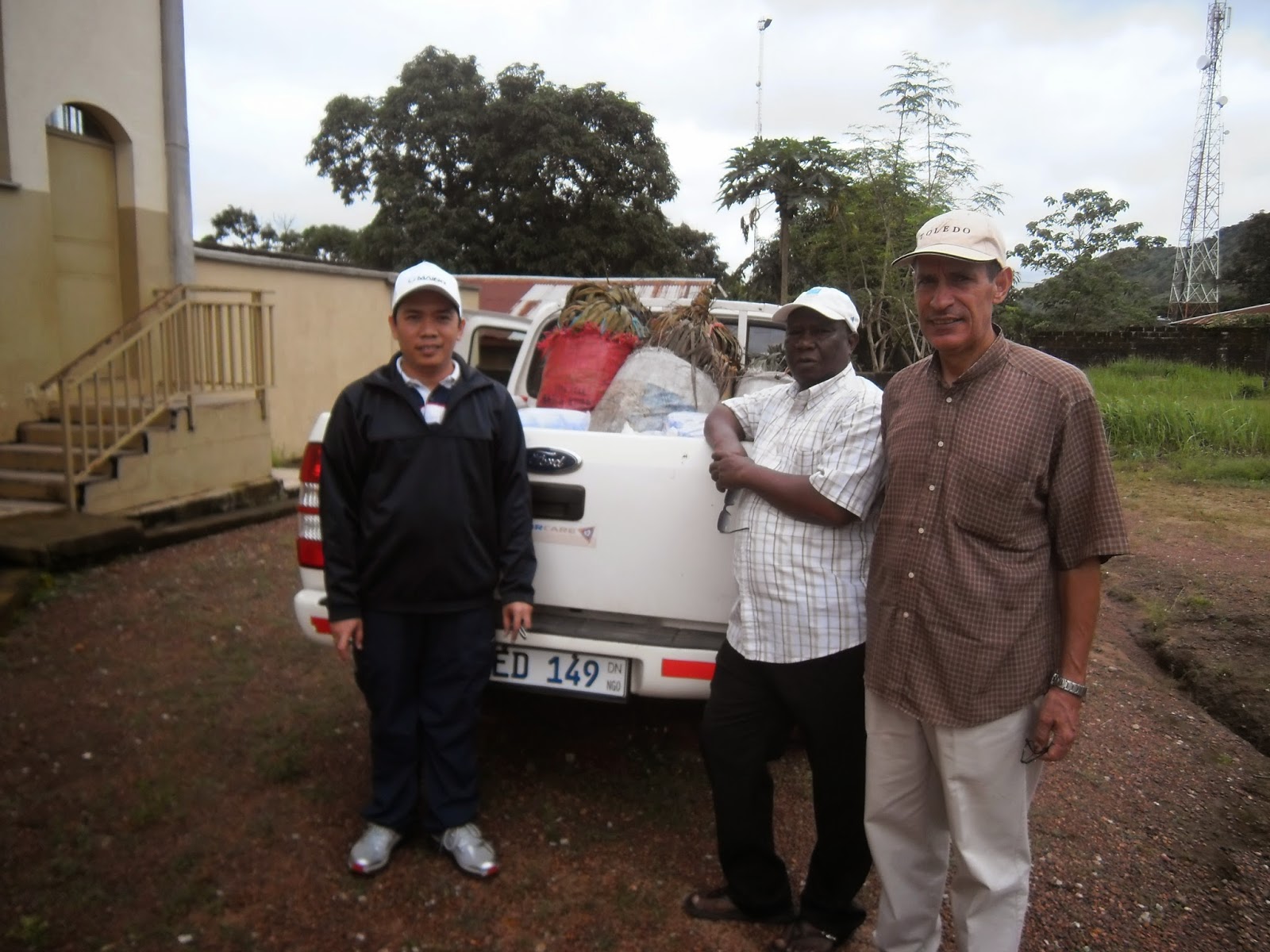 How do we bring the embrace of God to families in quarantine? First of all, Fr. Jerome Pistoni and I visited first the families in quarantine.  The purpose of our visit was not to give goods  immediately but to pray with them and to see first their condition and ask what they have received from the government and NGO, in order to understand what are their real needs.  We involved the parishioners of St. Conforti Parish to be one with our suffering brothers and sisters in quarantine. A time of crisis like this is a time to help others, not just to think only of oneself.  It is a time to show a love that is stronger than the Ebola virus. Our parishioners have showed their “nearness” to those in quarantine by donating money, bags of rice, salt, onions, sugar, condiments, charcoal, and fruit. With these contributions our parishioners have become “partners with God” in consoling the people in quarantine.

Consecrated people are witnesses and sharers of the “joys and hope, the sorrows and anxieties of the men and women of our time especially of the poor and those in any way afflicted are the same hopes and joys, sorrows and anxieties of the disciples of Christ” (cf Gaudium et spes). My reason for remaining here in Sierra Leone is to be with our people,  to continue to give them hope, and to assure them that their fears and tears are just ephemeral. Soon the country will proclaim “Ebola don don!” For the meantime, we pray and we continue to bring the embrace (ang yakap ng Panginoon) of God to all. May God bless us all. 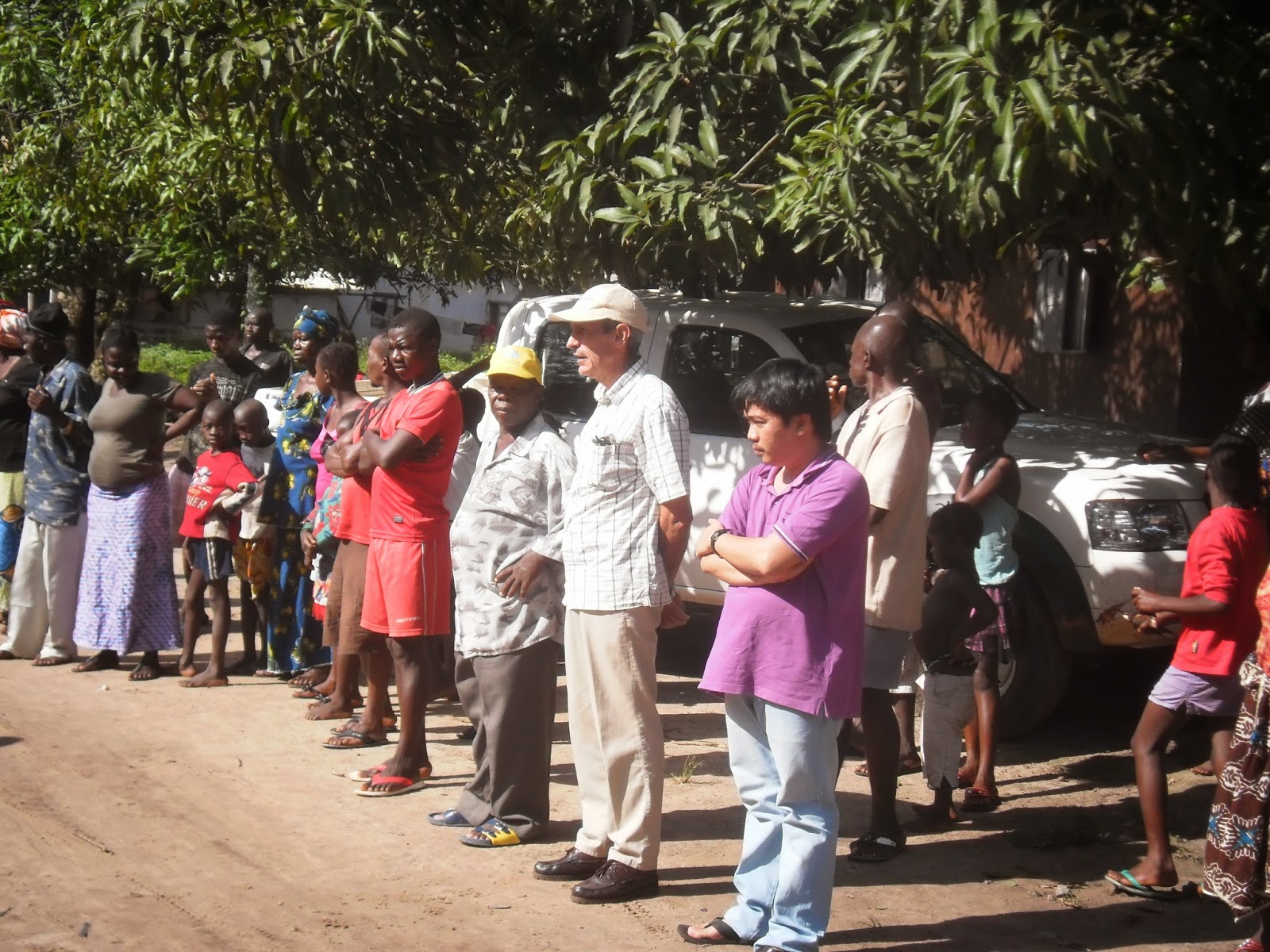 Typhoon Sendong Kills in the Philippines